Results of the 2011 Negev Desert Championship have been posted on the ISO website.

Results of the 2011 Negev Desert Championship have been posted on the ISOA website:
Negev Championship Results

Results are in an Excel file. The file has 4 tabs: Total shows the championship winners, based on the combined results from Park Golda and Nitzana. Separate meet results are presented in the Nitzana, Shivta and Golda tabs.

The event organizers apologize for the delay in publishing results.

Start times for the Israel Open Championship have been posted.

Competition Day 2 of the 2011 Israel Open Championship is an IOF World World Ranking Event (WRE). The event will be held on February 26, 2011 in the Elah Valley southwest of Jerusalem.

In addition to 400 Israeli orienteers, the Israel Sport Orienteeering Association will be hosting over 50 foreign competitors at next weekend’s Israel Open Championship. Competitors from Belarus, Belgium, Czech Republic, Finland, Germany, Russia, Sweden, and Ukraine will be participating in the event.

Competition Day 2 of the Israel Open is an IOF World World Ranking Event (WRE). The WRE competition will use a new map, produced by Petr Matula of the Czech Republic. The map is located within Park Britannia, a forest and recreation area southwest of Jerusalem. The terrain combines pine and cypress forest with semi-open land that has both natural woods and uncultivated fields. The topography is gentle, with just 125 meters difference between the highest and lowest points on the map. The region is characterized by numerous features, particularly boulders, stone walls, terraces, and rock faces. While not physically demanding, the courses present extreme orienteering challenges.

Important information about the Negev Desert Orienteering Championship is now available in English on the ISOA website. https://israelorienteering.org/championship-events/desert-championship-2011/

Important information about the Negev Desert Orienteering Championship is now available in English on the ISOA website.

This year marks the 10th anniversary of the event, which is held in memory of Hagar Palmach, a teenager who died in a hiking accident while a student at the Sde Boker high school in 2001. In addition to orienteering, participants will enjoy visits to geological and historical sites, swimming, biking and other sporting activities, and lots of social and fun events.

The Desert Championship is a prelude to the major event of the Israel orienteering season, the Israel Open Championship, which will be held on February 25-26 in the Judaean foothills, southwest of Jerusalem. Over 50 competitors from various European countries will be participanting in this year’s event.

Final preparations are in progress for the Israel Sport Orienteering Association’s annual Israel Open Championship on the weekend of February 25-26. This two-day competition in February attracts hundreds of competitors from Israel and abroad. Together with the  Negev Desert Championship on the preceding weekend, the ISOA offers a week full of  great orienteering.

This bulletin contains important information about the events, including registration instructions, schedules, driving maps to venues, and valuable course setters’ notes for each of the two days of the Israel Championship.

Two consecutive days of orienteering in two very different  types of terrain determined the winners of the ISOA 2010 Winter Cup.

The cumulative results from two days ultimately rewarded those orienteers who were consistent in their athletic and orienteering abilities both in the badlands of Park Eshkol in southern Israel and in the maze of cactus hedges among the olive groves in Ben Shemen Forest.

Some 400 competitors participated in both days of the championship, along with hundreds of recreational orienteers, who took advantage of the springlike winter weather to enjoy the non-competitive course.

The ISOA was delighted to host Swiss competitor Sophie Tritschler, a gold medalist in the 2009 JWOC relay. Sophie amazed the Israeli athletes with her speed and skill. But unfortunately, on the first day of competition she disqualified due to mistakenly skipping a simple control. On the second day of competition she vindicated herself, and produced a first-place result that also bested many of the under-18 boys who ran the same course, though in a different category.

At the end of the first day of competition, almost all categories were still open to challenge, with some of the top ranks separated only by seconds. Tension and excitement were high heading into the second day of competition.

Other notable results: Boys under-18: Nitzan Yasur from Yizrael club; Girls under-18: Adi Gutman from Modiin. 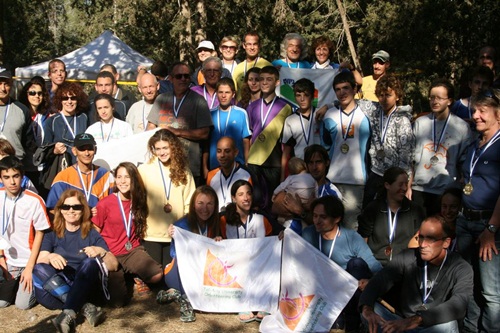 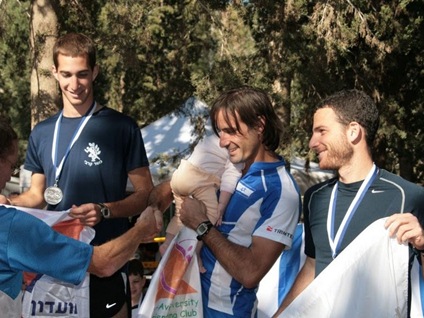 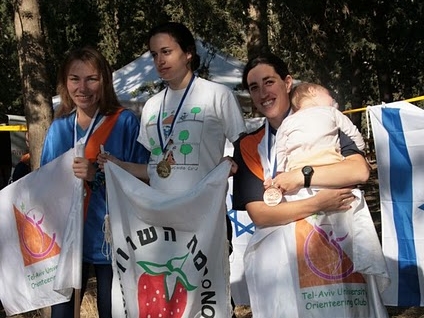 Overall, satisfying results for Team Israel at JWOC, according to coach Dan Chissick. Check out his blog report on the team’s performance.

Coach Dan Chissik and the Israeli orienteering community had plenty to be proud about today. All three Israel competitors produced better than expected results, with Eran Segal becoming the first born-in-Israel orienteer to everqualify for the A Final in the Middle Distance event.
The coach’s dream came true!